Anup Panthi is probably one of the most respected names when it comes to sound healing and Nāda yoga.

Having taught approximately to more than 5000 students in the past 12 years, Anup’s practice sees him take on the role of a teacher, a spiritual guide and a mentor for those he works with.
From a strong spiritual lineage, Anup Panthi has made his name as one of the most respected Nada Yoga instructors in the East, with over 1000 of his students going on to start their careers in private practice and with international sound healing schools. 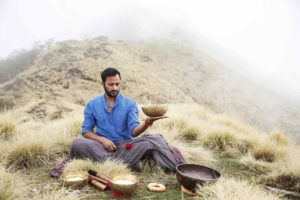 ” the form of the supreme is Sound ”

The word for “sound” in Vedas is “Naad”. However, “sound” is too simplistic of a translation because naad also indicates something more, beyond mere sound and vibration. Just as visible colours are only a small fraction of the light spectrum (the rest of which remains invisible to the human eye), similary naad is something more than what can be heard, uttered or defined in terms of frequency, pitch, or sound.. 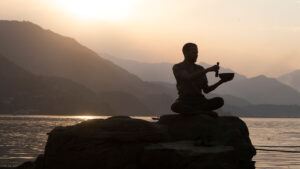 Human vocal chords have the amazing ability of producing a wide range of sounds. In comparison, very few musical instruments can even produce two sounds from a same string, note, or key. Therefore, if we wanted to produce sounds of different pitches, we would have to alter the physicality of the instrument, which may demand more strings, more air space, or more keys depending on the nature of the instrument…

A gentle thud from a hand-made singing bowl produces a wide spectrum of audible and inaudible vibrations, which can be assigned to many notes, frequencies, pitches, and tones. In order to reproduce this sound with instruments, we would have to play several octaves and tri-tones at the same time. The same thud also produces different dynamic frequencies and a wide range of audible and inaudbile sounds. But that’s not all of it, something very mystical, unusual and beyond logic … 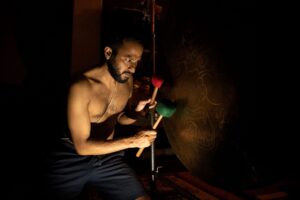